The Elegant Simplicity of Song

"It's amazing how much he's changed." I say aloud to Viv as we head to the car. And how much he has stayed the same I say to myself.

"I mean, can you remember the awkward, insecure, almost shy dude from the MTV unplugged show?" Hat on, spinning on the stool, covering his arms with political epitaphs, unsure of how to act beneath his massive new spotlight.

I have seen Pearl Jam perform countless times across the years in as many varied venues. Even when I am not actually in the same city or arena as the band, I track their set lists through a tour to see what they are playing. I have written ad nauseam about Pearl Jam, and for fear of repeating myself, I will once again confess, early in this piece, that Eddie Vedder is my hero. An idol, I have respected and for lack of a better word, an artist I have loved for most of my life. So there was little question that I would fly from Singapore to Perth for a whirlwind trip to see him perform a live solo show this past weekend. Lifting up an empty cup, I ask silently
All my destinations will accept the one that's me
So I can breathe...

Recently, I have been watching some Youtube clips of shows to see how he and the band are holding up. Surprisingly, part of me has been slightly disappointed by the fact that my hero has changed to the point of not fitting into the tight carefully crafted box into which I have placed him and would prefer for him to stay. I think back to that MTV Unplugged show and am reminded of the change and the growth that Vedder underwent in subsequent years from VS, Vitology and into No Code.

On stage, gone was the overly timid and tortured introvert who I saw as a mirror for myself, and in his place stood and glared and sang and raged a man who had learned the power of his own voice, both literately and metaphorically. And either through my own life experience or through the power of his music, I too had brought upon my own metamorphosis-- from bashful boy to…well something else.

Someone wild and free and determined never to sit quietly again. Someone demanding to be heard. Someone with a confidence boarding on violence, but rooted in the humility and honesty of the voiceless. Vedder helped us give a voice to everything we had always been told to hide. In the early years, he helped to show us how to transform shame to rage and would eventually teach us show to change it again into something less volatile. Something I dare call happiness? Wisdom? But at what cost? Can we look back and observe this transformation as anything but depressing. A fading of a light? Of growing old. Of domestication?

Today, Vedder reminds me of a jovial slightly drunken uncle.  He seems to wear the same clothes every day, jeans, t-shirt and button-up shirts make up his uniform. And his short hair, awkward dancing and onstage antics are more akin to Bruce Springsteen than say Ian Mckaye. In short, he has grown old and slightly dorky. I compare clips from the nineties to the present and worry that perhaps, the man I felt would always be my barometer of cool, might not be anymore. (I do not want to beat you over the head with the parallel story I am telling here, but please remember the earlier mirror analogy I began this story with. Am I too becoming old and irrelevant and uncool?)

A mind full of questions, and a teacher in my soul
And so it goes...

So if I can observe a domesticated joy in Vedder, does mean that others notice it in me too? The songs from the early years, as I have repeatedly noted, are still a crucible of emotion for me. A catalyst of transformation and a place where I go to remember and relive the pain, the suffering, the change, the growth, the renewal. When I watch old footage and look into his eyes,  I am reminded of the fire that forged the man I am today.  In a way, I need him to always be the source of that fire, for this nostalgia is necessary for me to keep my fire stoked and burning.  Or is it? Is it possible, that I too am ready to allow the flames to grow warm and simmer.  For although we have both grown old, the fire has done its job. The metal has been forged. Perhaps it is time to enjoy the heat in different ways.

What can one really tell from a Youtube video? How can one feel the passion of one of the greatest rock bands in history, through a three minute clip on a tiny screen? I needed to see for myself. I needed to make certain that Eddie Vedder was not becoming some depressing old lounge act, rehashing old hits for his adoring yet faithful fans. I needed to be certain that I was not getting old. So off to Perth I went.

From the second he took the stage, before he said a word or played a note, I knew that he was more relevant now and more important to me than he has ever been. I realized that it had been unfair to hold on to what I needed him to be--a beacon of my past, a symbol of my pain, a well for my rage. I was being unfair to both of us. Heroes if they are to be true, cannot remain stagnant. He cannot be a romantic yet impotent nostalgia.

I've got my indignation, but I'm pure in all my thoughts
I'm alive...

Wind in my hair, I feel part of everywhere
Underneath my being is a road that disappeared


Aging is a slow process. It is not sudden or painful in the way that one expects. It is a low moaning ache that one feels in his joints every time he wakes up. Growing old is an ongoing revelation of ones successes and failures. A daily balancing of the ledgers of the promises you made in your youth. A cashing in of promissory notes. Have you become the person you wanted to be when you were young? But the reality is that when you are young, you have no idea about the possibilities and choice of the people you could  become as you age. And these new choices can be excited. Dare I say rejuvenating.

So while the younger me could not imagine an Eddie Vedder singing love songs on a Ukelele on a stage lit by artificial starlight, he also could not imagine a future self sitting calmly in his seat nearly crying because of a tender awareness that made the night so perfect. Gone was the sweat and the need to mosh and crash into other lost young men to prove something not one of us could name. Gone was the ferocity and rage that kept us all, audience and band, chained together. And in its place the graceful honest aging of men and woman stewed in the same cauldron of celebration. There no longer seems a need to attack. 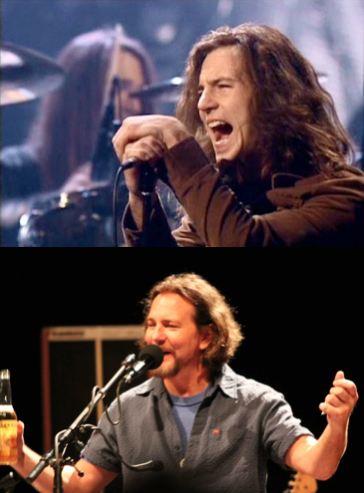 Please don't get me wrong, Eddie has not become fat Elvis. The intensity and veracity with which he approaches his art has not diminished in the least bit. In fact, it has been carefully honed and perfectly crafted. It was funny to watch Vedder the man, still bumbling incoherently through stories and uncomfortably addressing the crowd. Still the timid troubadour unable to express himself in anything other than song. Vedder is still the awkward introvert when not shielded behind the walls of his songs. But oh the songs! Stripped down and laying vulnerably naked on the stage were the perfect mirror I needed. The lyrics part spiritual hymnal, part philosophy are still all the religion and/or therapy I need.

Leave it to me as I find a way to be
Consider me a satellite, forever orbiting
I knew all the rules, but the rules did not know me

Life works in stages, in chapters, in verses and acts, and the actors must know the needs of the characters.  As I approach forty, on the precipice of an inevitable mid-life crisis, I am thankful I have an idol, a rock-star role-model, a man who is once again a few steps ahead of me scouting the landscape and warning of pitfalls and sharing with me the joy of maturity. And since I have built a relationship, not with the man, but with his songs, he has gained my trust. By never letting me down and not allowing me to pigeon-hole him, he has forced me to acknowledge my own transformation.

He asked that no one record the show as he wanted us to enjoy the moment and enjoy the privacy we had earned by being in the room, so I cannot share with you any Youtube clips of the night, but trust me the clips would not have done justice to feeling of sitting fifteen rows back, dead center, watching your hero do what he does best- allow people to understand themselves and each other through the elegant simplicity of song. 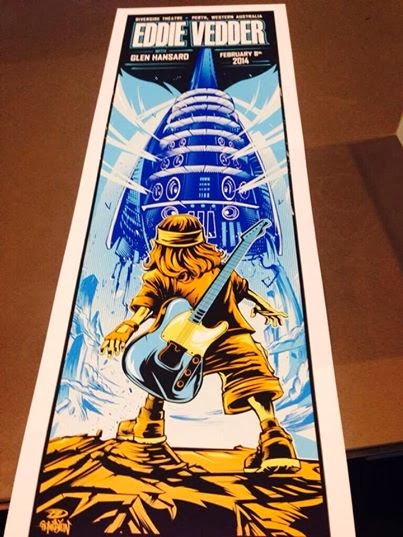